The guide to the Upper Bavaria, the land of Salzburg and the land of Tyrol
Phone:
+79032842274
bratezroma@mail.ru
Follow the news section
Contact us
Menu
Home \ Hiking \ Waterfalls \ Gollinger Waterfall (Gollinger Wasserfälle) 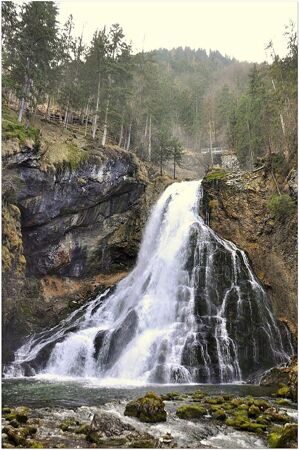 The Gollinger waterfall is the closest waterfall to Bad Reichenhall, only 30 minutes (nearly 30 km) and you are there.

The waterfall is situated on the territory of Austria, as it is near; I decided to tell about it.

It is the second waterfall that I have visited. I can say that the impressions are incredible!

Attention! Officially, the waterfall is open for visits from the 1st May until the 1st   November; visiting in other time is “at your own risk”. We were there at the “closed” time. You should be careful on the wooden steps that may be slippery from the rainfall. Moreover, do not leave your children alone, because there are mountains and water, you should be attentive!

The entrance is paid: 3 euros for adults, 1, 5 euros for children. Attention!!! They accept only cash, it is better to have coins 1 or 2 euros.

The parking is situated not far from the road, put this address to the navigator:
Österreich, Wasserfallstraße 23, 5440 Golling an der Salzach

From the parking go up along the stream by the signs, to the mountains

Walk slowly along the shores of the stream, look at the old mill

Somewhere in this place stands something like the checkpoint, as I understand in summer the passage to the waterfall is paid, we were there in the end of March and the passage was free.

Then there is the waterfall itself. While we were walking around we saw only two tourists and that was all… Nobody!!!

Silence, birds’ singing and the noise of waterfall

While walking , look around and one may smile to you

If you are in a good physical shape go up to the spring, we were interested.

Attention!!! It will be difficult for mothers with prams to go up, as the staircases are rather steep, and there are sprays above the waterfall. 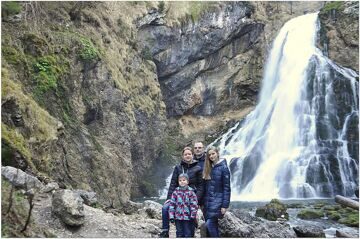 The page about the waterfall on the city website: The Waterfall Gollinger