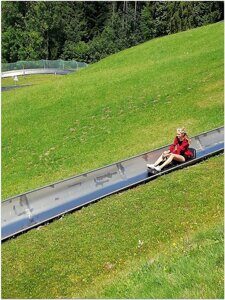 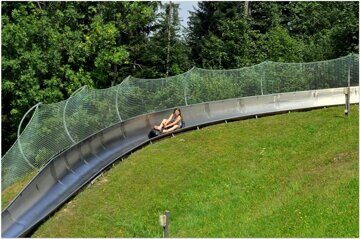 What does a man want in winter? Summer. Then a man goes to warm countries. Moreover, what does a man want in summer? Winter. However, it is difficult to get to Antarctic or Arctic. Then what can I do? It is possible to cool off, but where can I sleigh ride? In Berchtesgaden!!! There you can find a special summer track of toboggan. The same sleighs but on the small rollers ride on the special gutter.

The distance from the city Bad Reichenhall is 27 km (35 minutes).
The parking lot:  Scharitzkehlstraße 6, 83471 Berchtesgaden, Germany
The website: Summer sleighs of Berchtesgaden

The length of the track is 600 metres, there is a lift. Children under 6 years ride only with adults, children after 8 years can ride on their own. The track is closed during the rain.

It is open from April until the 31 October. 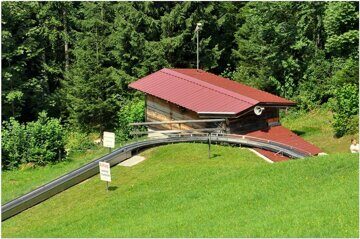 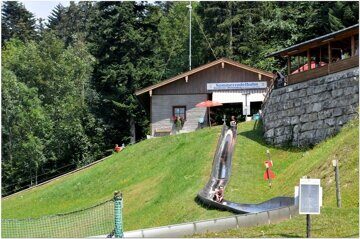 We came; the track was really 600 metres length. The starting point was from the house on the final photo; there the lift dragged the sleigh with the rider. Three big turns. My daughter and wife refused to have a ride; I took one sleigh with my 7-year-old son for us (you can ride together with the child under 10). Start, acceleration, right turn… The feelings were unusual, for the first time I slowed down, but then the confidence appeared. Before the second turn I noticed the electronic speedometer, it showed 32 km/h… we forgot about the brakes, but in the last turn, we overtook the girl and had to pull back. At last, the lift automatically took the sleigh and put them to the start. The meeting with the wife and daughter. You cannot imagine how much excitement my child had! ))) The short outburst of emotions and:” I want more!!!”. Moreover, who would be against this? ))) My daughter followed our example and decided to try too. The second race we considered the experience of the first lap and let the rider ahead go on the greater distance. The result was 36 km/h. The third race – 38 km/h.

On the way we rode by the Aerie, we thought to have a stop there. However, I saw many cars on the parking lot and remembered the words of the host of the apartment not to visit that attraction so… we went further. We definitely didn’t regret doing that!!! The emotions were fantastic!!! Do we come again? Here – probably not, but there are many similar tracks around Bad Reichenhall, and we are going to visit them necessarily.

At last, watch the landscape where the track is situated.